Construction work on the floating foundation took place between 2016 and 2017 in Saint Nazaire. It was inaugurated on 2017 October 13th and was installed on the Centrale Nantes offshore test site, SEM-REV, on April 2018 to perform all tests in real conditions. Since September 2018, the Floatgen wind turbine exporte kWh to the electricity grid.

See the movie presenting the technology

Innovation at all levels

Innovations is present throughout the project, whether it be the concept of a floating foundation in a square ring shape, or the offshore test site itself, or the type of concrete used for building the  floater, or the material used for the mooring lines.

The Centrale Nantes SEM-REV offshore test site, on which the wind turbine will be installed, is a research facility of international scope. It enables full deployment of prototypes which capture ocean energy (wind, waves) in real conditions at sea. Hence, researchers and professionals have access to the necessary tools to test prototypes before the commercial stage.

Sea the video about the construction & installation of FLOATGEN

Floater of 36 meters wide and of 9.5 m height (7.5 m draft).
Equipped with the Ideaol’s Damping Pool ® system and built in prestressed reinforced concrete by Bouygues TP 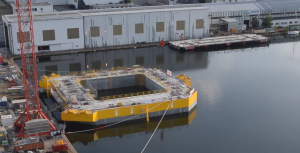 The Vestas 2 MW V80 that will be installed on the floater was unloaded on Saint-Nazaire harbour in June 2016. It will be slightly modified before being installed along the dock on the transition piece.

The elements of the anchoring system were assembled and installed on the Centrale Nantes test site, SEM-REV, in june 2017. This very innovative system, developed by the start-up Ideol in collaboration with Centrale Nantes, consists in particular of 6 synthetic mooring lines (nylon) – a first for permanent anchoring of this dimension.

Three deep sea tugs were deployed during this delicate operation. Setting off late afternoon on Sunday 29th April, it took them about a day to transport the wind turbine to the SEM-REV test site. An additional three to four days are necessary for docking and connection to the export cable, which connects the wind turbine to the power grid onshore. Floatgen will be tested under real operating conditions for 2 years.

The connection of the electricity export cable and a final series of tests carried out in recent days enabled the Floatgen wind turbine, which is installed 22 km off Le Croisic (Loire-Atlantique), to become fully operational on Tuesday 18 September 2018. For Centrale Nantes, this is the first production tool and the first injection of electricity into its export cable at its SEM-REV test site dedicated to marine renewable energies (third installation after tests on acoustic sensors and cable weights). With its connection to the grid, SEM-REV will enable the wind turbine to supply electricity to 5000 inhabitants. 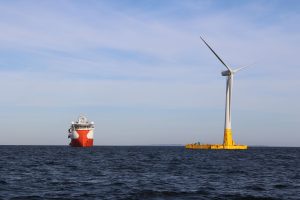 Starting point of a serial deployment

The Floatgen project, the first wind turbine in France and first demonstrator of the floating foundation technology developed by Ideol, already provides and will continue to provide unique practical feedback to the partners of the consortium. Lessons will be learnt on building methods, installation and exploitation of the floating system and will be used as a commercial example for export. In July 2016, the French government selected a consortium led by Quadran with the Ideol floater foundation and Bouygues TP know-how, for the construction of a first offshore floating wind farm in the Mediterranean sea (4 units will be installed off Gruissan, one of the best sites for wind resources in Europe). This will be known as the EOLMED project.