French company specialized in the development, funding, realization, operation and maintenance of renewable energy power plants in France and worldwide

Finally, our French team based in Nantes and Montpellier are working closely to our projects in order to establish tight relationship with the main local stakeholders.

In 2019, Valeco EnBW, became the owner of the offshore test site Mistral, located in the Mediterranean sea. This test site is granted with an authorization for the installation of two floating offshore wind turbines. This project represents a unique opportunity to test innovative technologies related to Marine Renewable Energy in the Mediterranean offshore conditions.

EnBW is involved in the development of an innovative floating wind concept, together with the North German engineering company Aerodyn: Nezzy². A prototype of this multi-rotor concept (scale 1:10) has been tested in Germany: firstly in a flooded gravel pit near Bremerhaven and then in the Baltic Sea in real wind and wave conditions.

The tests have shown that the prototype is now ready to be tested in the sea on a full-size scale. The 1:10 scale model has now been dismantled and the recorded data will be further evaluated. The findings will then be incorporated in the design of the 1:1 scale model, which is set to be tested in China in 2022. 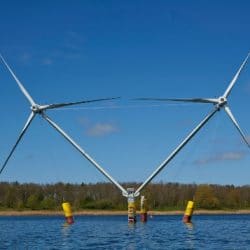