The experimental station SEM-REV (off Croisic) is situated in a zone where fields of Haploops (tube-dwelling amphipods) were listed. The sedimentary structures built by Haploops constitute a particular ecosystem which welcomes specific faunae and thus represent a potential source of biodiversity for the maritime part of the estuary of the Loire. Nevertheless, the interactions between Haploops and their environment are little known. The role of these fields of Haploops on flows (sedimentary and geochemical) as well as on the concentration of certain contaminants will be examined, by insisting on the analysis of foraminifera assemblages.

The main objective of the HOOPLA project is to estimate the potential impact of the anchoring of the wind power structures and the electric cables buried on this specific habitat and to determine the adequate indicators to follow the evolution of the disturbances engendered on the seafloor by such structures.

The advances and innovations adressed within the HOOPLA project are:

The expected impacts of the HOOPLA project are:

Within the HOOPLA project, the following demonstrators are used:

The HAPLOOPS fields are a particularly rich benthic ecosystem, allowing the development of a benthic macrofauna and a pelagic fauna.

The burial of the SEM-REV offshore test site power cable in 2012 left different marks in each sedimentary facies traversed that are fading at uneven rates. These marks can be seen on bathymetric maps and sonar imagery.

In the fluid sandy mud east of the Haploops stand, images obtained in 2017 and 2018 show no sign of the cable route (blue square). Here the ecosystem has returned to its original state in less than 4 years.

In the Haploops bench, a deep irregular trench is clearly visible in 2017 on the bathymetric map (orange square). This trench does not appear on the imagery. In 2018, some fractions of this trench appear to have been filled in (red ovals), indicating a recovery time of at least 6 years.

In the muddy sand with gravel, the cable route is visible on both imagery and bathymetric maps. In this facies, the scar is wide, straight and relatively shallow (green square). The sediment in this trench appears to be, since cable burial (2018 imagery), thinner and/or more fluid. No evidence of a return to the initial state is detectable after 7 years. 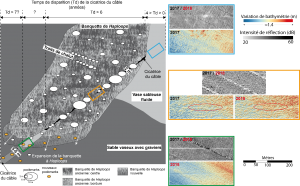 Biotic indices are tools that synthesize information on the quality of ecosystems in a simple way such as a numerical value that can be associated with a characteristic state of the environment. These indices are based on different taxonomic groups serving as bio-indicators. There are indices based on specific diversity, and others based on ecological groups of species.

In the case of a relatively small impacted area (a few meters wide), foraminifera appear to be a suitable study tool. Indeed, a large number of individuals representing the biodiversity of the environment can be obtained by collecting a small quantity of sediment. Thanks to this characteristic, it is possible to study small ecosystems and to carry out replicates of samples in order to strengthen the subsequent statistical analyses.

In the case of the study of the cable trench, a transect was carried out from the bottom of the trench (H1), to the unimpacted Haploops spp. settlement (H4), with an intermediate point on the trench slope (H2). Three sediment cores dedicated to the analysis of foraminiferal communities were collected with scuba divers for each station. Deployment of on-board corers or grabs deployed from the deck of the ship has a localization accuracy of the order of a few square meters, making their use impossible for such a spatial approach.

Five years after the installation of the SEM-REV cable (in 2017), few differences were observed in the foraminiferal communities between the reference station and the two impacted stations. The differences are concentrated on the vertical distribution of communities and likely reflect the absence of the Haploops bench in the cable trench (see associated core photos). 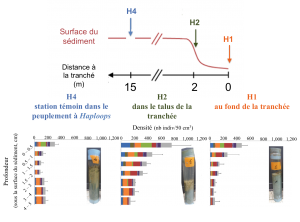 Ecological status of individual stations and limitations of biotic indices

The test of two biotic indices (the Atlantic Foram-AMBI and the Mediterranean TSI), was carried out using data from foraminiferal faunas along two transects, within the Haploops bank and in the adjacent sandy mudflat.

Although the two indices do not place the stations in the same ecological states, the trends are identical:

In order to apply these indices, it was necessary to assign some major species that were not assigned, or to modify the ecological grouping proposed in the scientific literature by taking into account our ecological observations over local assemblages.

The corrections applied to the TSI-Med do not take into account the trophic specificities of the Bay of Biscay, which biases the absolute values of the calculated ecological states. The ecology of some species still needs to be better defined for the assignment to an ecological group to be completely reliable. 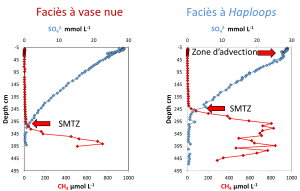 Pockmarks indicate eruptive emissions of methane into the seafloor. However, methane can also rise from its reservoir by quieter but continuous processes through the sediments by diffusion. Five meter cores from the two sedimentary facies monitored in HOOPLA show a zone of methane production closer to the surface in the Haploops and pockmarks facies than in the bare mud facies. Methane is a reduced chemical species of carbon, and when it comes into contact with the sulfate in seawater, it oxidizes and disappears fairly quickly, preventing it from diffusing into the water above the sediment. It can be noted that near the surface in the Haploops facies the vertical distribution of sulfate is disturbed and made more homogeneous than for the bare mud facies. This is due to the numerous abandoned Haploops tubes that form a layer that allows seawater to circulate thus erasing the chemical gradients within the sediment. 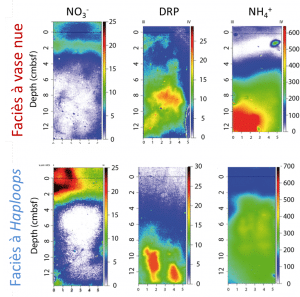 Thanks to innovative techniques (DET-2D), we are able to map the chemical compounds dissolved in the sediment at the submillimeter scale. We can therefore study in detail the effect of Haploops tube entanglement on the distribution of nitrate, phosphate and ammonium for the two facies studied. It can be observed for the Haploops sediments that phosphate and ammonium have a vertical organization that would correspond to the effect of water circulation. This translates for ammonium to less marked variations in concentration. The consequence of these circulations is the efficient oxidation of ammonium generating an excess of nitrate in the overlying water compared to the bare mud facies. This could contribute to local primary production, which would be a less ad hoc food source than the suspended of organic matter due to methane eruptions.

For a non-specialist audience:

Follow our news and those of the Marine Energy community in Pays de la Loire
We use cookies to ensure that we give you the best experience on our website. If you continue to use this site we will assume that you are happy with it.Ok