Within the framework of the deterministic approaches, the mean values of the soil properties are used without taking into account the uncertainties of these parameters and without considering the spatial correlation of these properties. Thus, the output parameter is given by a single mean value which does not reflect the uncertainty associated with this parameter. The probabilistic approaches allow one to overcome this drawback. Indeed, the probabilistic approaches taking into account the soil spatial variability allow one to rigorously determine the response of the system under study as a probability density function PDF). One could even determine the probability of failure for an acceptable threshold of our output variable. This project aims at performing a probabilistic analysis of a wind turbine foundation taking into account the three-dimensional soil spatial variability and the loading variability.

The deterministic computation of wind turbine foundations requires a three-dimensional (3D) analysis since these structures are subjected to complex loading (due to waves, wind, etc.) thus leading to very time-consuming computational models. This presents a great obstacle to the use of conventional probabilistic methods as Monte Carlo Simulation (MCS) methodology. On the other hand, taking into account the 3D soil spatial variability within a probabilistic analysis significantly increases the number of calls to the deterministic code. The objective of this project is to provide for these complex 3D offshore geotechnical structures, a reliable and efficient methodology for the propagation of uncertainty. Our aim is to determine the Probability Density Function (PDF) of the system response and the failure probability against a prescribed threshold within a reasonable computation time. Indeed, the existing probabilistic approaches do not allow one to rigorously compute the failure probability due to the use of a small number of simulations thus leading to a large value of the coefficient of variation on this failure probability.

Development of numerical tools for the analysis of wind turbine foundations that may be used by practical geotechnical engineers working in the area of offshore structures.

The work of this project involves two main items: (i) Development of efficient three-dimensional mechanical models for offshore wind turbine foundations subjected to axial and lateral loadings and (ii) Development of probabilistic models in order to calculate the probability of failure of offshore geotechnical structures taking into account the three-dimensional soil spatial variability.

– For the development of mechanical models, an offshore large diameter monopile was modelled using Abaqus finite element software. Two types of modelling were considered in the mechanical model: A wished in place model and a more sophisticated model taking into account the installation process. The later model makes use of the coupled Eulerian-Lagrangian approach implemented in Abaqus software.

– For the probabilistic analyses, three efficient probabilistic methods based on the Kriging metamodeling technique were developed in this work: GSAS, AK-MCSm and AK-MCSd. GSAS method combines Kriging with global sensitivity analysis, the objective being to provide a better enrichment of the meta-model as compared to the classical Kriging approach. AK-MCSm approach uses a multipoint enrichment technique. This is very useful in the case where parallel computing facilities are available. Finally, AK-MCSd approach uses the dependencies between the Kriging predictions and permits to reduce the computation time as compared to the classical Kriging approach.

The main results of the different simulations are as follows: 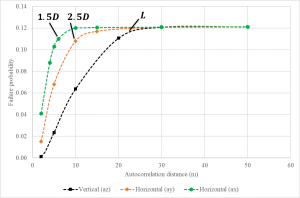 Fig.  Effect of the spatial variability on the failure probability