Irish company in charge of the manufacture and deployment of floating river turbines designed by GKinetic.

DesignPro Ltd is a leading provider of precision automation and machine build services to a variety of industries such as pharmaceuticals, medical devices, aviation, automotive, cosmetics and renewable energy. Based in County Limerick, Ireland the company has developed a reputation as a creative and highly professional partner to some of the world’s largest multinationals. Providing a complete turnkey solution, our services include; problem analysis, design, prototyping, build, installation and maintenance. Together we work with companies to reduce cost, improve efficiency and deliver return on investment all within specified timeframes and budgets.

DesignPro get involved in the MRE field by taking charge of the manufacture and deployment of floating river turbines designed by GKinetic.

GKinetic contracted DesignPro to build a 1:20 scale fluvial floating hydrokinetic device for testing at the tank test of IFREMER, FRANCE. 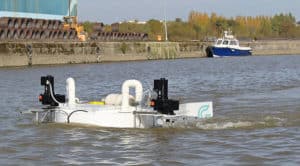 DesignPro succeed the Phase 1 of the “Horizon 2020 SMEs” call for project for the commercialization of floating river turbine of some 10kW.

GKinetic also received financial support from the Sustainable Energy Authority of Ireland (SEAI) of € 96,000 in 2016.

DesignPro is progressing well with the development of smaller-scale river devices with plans to deploy three 25 kW devices in Europe and Canada in 2017 and 2018.

In March 2017, DesignPro and GKinetic Energy secured a European grant of € 2.7 million to market a new range of 25kW and 60 kW hydrokinetic turbines in the second phase of the call for project “Horizon 2020 SME Instrument”.

The 27-month project started in July 2017 and is expected to create up to 15 jobs during the project development phase and 50 jobs after the commercial deployment, according to DesignPro.

The project will also collect data to assess the environmental impact of the technology. DesignPro launched a call to identify a certified estuary or river test site.

DesignPro received the “Champions of EU Research” certificate following the excellence of its recent research.

The Irish start-up has announced its intention to deploy its 60kW hydrokinetic turbines in the third quarter of 2018 for a minimum testing period of three months. Now the device has reached the level 6 of the TRL chart, the company is looking for a relevant test site. this site must allow the assessment of the environmental impact of the project and the running of operational tests.

The SEENEOH test site in Bordeaux has already been chosen for the 25 kW prototype test.

The installation of the turbines at the SEENEOH French test site is scheduled for September 2018, following a final stage of optimization of the prototype and deployment plans in the Limerick Design Pro plant.
The 3D design of the floating platforms created to receive the turbines is completed and the construction has started. The turbines will be delivered in France in late July. Each  floating hydrokinetic device will be composed of two vertical axis turbines with outward-turning blades to divert marine life and debris.
The new optimized design will make it possible to  easily take the turbines out of the water without having to remove the entire device and will also facilitate deployment, installation and maintenance procedures, while reducing delays and costs.

After a river transport on the Garonne River, the 25 kw tidal turbine is successfully installed on its SEENEOH final destination site. The Cœur d’Estuaire company delivered the tidal turbine to the site and a technical team proceeded with the assembly and connection to the floating platform.

The first round of trials have started.

After obtaining patents in Europe, Australia and China, GKinetic successfully patented its technology for the assembly of its water turbine in the United States. This event marks a milestone in GKinetic’s penetration of the tidal energy market and offers new opportunities for them to develop their technology.

H2020 funding is coming to an end, but the project is extended by 12 months thanks to the Blue-Gift program (Blue Growth and Innovation Fast Tracked) funding.

This new funding is an opportunity to study the long-term performance of the device (durability, reliability, maintenance …) to develop a market-ready product.

This additional test period should notably allow the improvement of the device, including the development of an MPPT system (Maximum Power Point Tracking), in partnership in conjunction with Mitsubishi Electric Ireland.

In mid-March 2020, the project achieves a new milestone with  significantly improved performances due to the developed MPPT system.