Marine Energy in the United States: An Overview of Opportunities

The “Marine Energy in the United States: An Overview of Opportunities” report published in February 2021 summarizes the best available data on U.S. marine energy resources at the national, state, and regional scales.

Within this report, the National Renewable Energy Laboratory (NREL) has compiled data to help improve understanding of the locations and characteristics of the marine energy resources and how they might contribute to the future energy portfolio of the United States.

Marine energy technical resource in the US per type of resource, source: NREL

The report focuses on the technical resource within the nation’s Exclusive Economic Zone (EEZ) that can be harnessed for large-scale (megawatt- to gigawatt-scale) energy generation.

The technical resource is a proportion of the total energy available in the resource (theoretical resource) that can be captured using existing technology options. It does not consider external constraints such as socio-economic, environmental, regulatory, etc. that determine whether a project is viable at a specific site.

As shown on the map below, marine energy resources are geographically distributed throughout the United States and provide unique opportunities to different states and regions.

While wave energy is particularly enegetic on the West coast, tidal energy could play a major role in Alaska and provide valuable contributions in Washington state and several Atlantic states. Ocean current energy extracted from the Gulf Stream could be of real interest for North Carolina, South Carolina, Georgia and Florida. The OTEC resource is immense (4,600 TWh/yr) and distributed across the United States, its territories, and freely associated states. However only a very small fraction is located nearland and exploitable in a near future while cheaper energy storage technologies are being developed. Finally, the nation’s riverine resource could provide a particularly interesting opportunity for remote communities to reduce their use of diesel power. 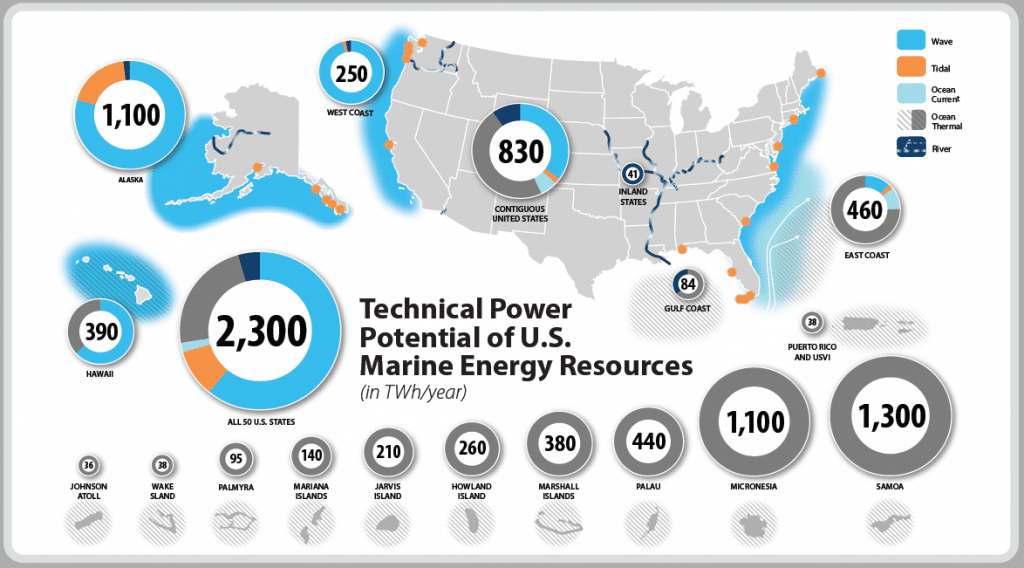 While this report focuses on marine energy resource that can be harnessed for large-scale (megawatt- to gigawatt-scale) energy generation, less energetic sites may be valuable to many blue economy applications which often have lower power requirements, such as providing power at sea to support offshore industries, science, and security activities and also meeting the energy and water needs of coastal and rural island communities. Including these resources would increase the overall resource available withing the U.S. exclusive economic zone (EEZ). In addition, the value of energy in these markets is typically high, and there is the potential for significant market opportunities and economic benefit in harnessing marine energy for blue economy applications.

The report acknowledges that more work is needed to improve the accuracy of the technical resource estimates. Reducing the uncertainty will be achieved first by improving the accuracy and resolution of the underlying resource data sets, then by validating them with onsite measurements. Building consensus and a standard methodology is also needed for estimating the technical resource from the theoretical one, as divergent approaches still exist, in particular for wave energy.

And it should be noted that new high-resolution wave hindcast data sets are being made publicly available via cloud-hosting services (Yang and Neary 2020) and will be accessible via the MHK Atlas by the end of 2021. The improved resolution of this data set is expected to help project developers identify specific wave energy sites that are suitable for specific wave technologies.

"Marine Energy in the United States: An Overview of Opportunities" on NREL website