In 2015, the Norwegian company Statoil (now named EQUINOR) launched the first floating wind farm project in the world, Hywind, off Peterhead, in Scotland.

In October 2017, Hywind has started powering the Scottish grid, with the supply of the first necessary electrons.

Building on the successful experience of its demonstrator Hywind Demo launched in 2009, the Norwegian company Statoil started in 2015 the world’s largest floating offshore wind park project, Hywind, to be installed, in north-eastern Scotland and 25 km off Peterhead.

For this project, Statoil received approval from the Scottish Government in November 2015. The investment for this project was € 214 million, representing a 60-70% cost reduction per MW compared to the Statoil demonstration park in Norway, Hywind Demo, launched in 2009.

Siemens supplied the  five SWT-6.0-154 direct drive offshore wind turbines. Nexans was responsible for the provision of static and dynamic cabling for a contract of approximately € 10.2 million. Nexans has also delegated to the Bardot Group the supply of buoyancy modules for electric cables. Navantia-Windar was in charge of the fabrication of the floating foundations. Finally, Navacel was awarded the contract for the construction of the five towers supporting the turbines.

In March 2016, Navantia built the first block of the first floating foundation. The assembly of the five foundations was finalized in January 2017 at its production plant in Fene, Spain.

The two first foundations arrived in May 2017 at the project’s assembly base in Stord, Norway. 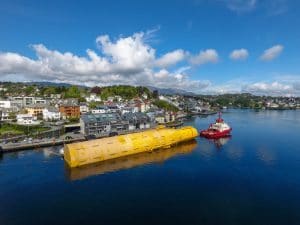 In June 2017, the assembly of the five turbines started in Stord, waiting to be sent to Scotland after a series of tests. 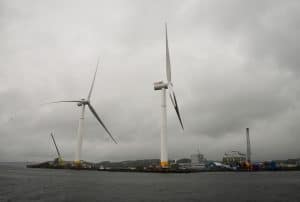 In August 2017, the 5 wind turbines of the first floating wind farm Hywind have eventually been installed off Peterhead, in Scotland. The mooring system has been installed by NorSea Group (UK) Ltd., in collaboration with Montrose Port Authority.

In September 2017, all the cables were installed.  After the final tests of the 5 wind turbines at Hywind park, it started supplying electricity to the scottish grid in October 2017, when it was initialy scheduled to go into service.

Moreover, the turbines are fitted with a number of sensors, which makes it possible to extract as much data as possible from the wind farm. We know that for the third consecutive year, this park has the highest electricity production capacity in the United Kingdom, with an average load factor of 54% the first two years and 57.1% the last twelve months, while the average offshore wind in this country is around 40%.

The data collected allows Equinor – formerly Statoil – to optimize power generation costs, with a 70% reduction in Capex per MW from Hywind Demo. The decline should continue for the Hywind Tampen, which will be built off Norway. 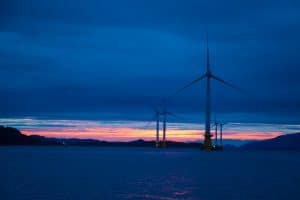 Located 140 km from the Norwegian coast, the Hywind Tampen wind farm will be, at the time of its commissioning, the largest floating offshore wind farm in the world, and also the first to supply energy to an offshore oil and gas field – Gullfaks and Snorre –. Two 12.9 km and 16 km static export cables will connect the wind turbines to the Snorre A and Gullfaks A platform

Wind turbines equipped with a High Wind Rode Through (HWRT) system: if the wind speed is greater than 25 m/s, the turbines do not stop, but only reduce their power.

This new park will thus reduce CO2 emissions by 200,000 tonnes per year, and nitrogen oxides by 1,000 tonnes per year. The project is due to start at the end of 2022. Thereafter, Equinor hopes to carry out large-scale commercial projects of at least 1 GW.

Construction of the concrete foundations-April 2021

Aker Solutions has completed part of the concrete foundation construction in Norway. The 11 substructures can now be towed to Vindafjord where the remaining formwork and mechanical equipment will be completed. The construction started in the dry dock where the first 20 meters of the foundations were built. After being towed out to sea to Vindafjord, the concrete formwork will be completed to a height of 107 meters. The substructures will then be towed to Gulen for assembly in 2022.