Tidal Lagoon Power, a company specialized in the development of tidal projects, is launching the world’s first tidal lagoon project in Swansea Bays (Wales), expected to start in 2018 and extend over four years.

This project, also supported by LDA Design and Atkins, is estimated at £ 1.5 billion euros will present the following products:

The announced value of this project is that it is expected to provide reliable and predictable energy in the long term. Indeed, the structure is created to generate electricity at the rising and falling tide, four times a day. Thus, this project should  generate enough electricity to supply 155,000 Welsh homes with electricity for the next 120 years.

As stated in a report published in April 2017 by Seafish[1], the lagoon could also be used for aquaculture, such as mussel farming or algae farming. In addition, additional docks will be built as tourist sites, with a nautical center and a new beach. The structure should also prevent the risk of flooding.

This project is considered as a “pathfinder” before the launch of the construction of the world’s first large-scale tidal lagoon: Cardiff Tidal Lagoon.

In July 2017, investors have already committed 225 million euros (Source Financial Times) and are awaiting British financing to complete their investment.

Following the announcement of the lack of funding from the British government, Tidal Lagoon Power has reached an agreement with its shareholders and creditors to pay off its debts in installments.

In addition, the company has commissioned a financial firm Holistic Capital to analyze other financing possibilities for the project. One of the options would be the direct distribution of the energy produced to consumers. This alternative would involve the creation of an electric company as part of the Swansea Bay project. 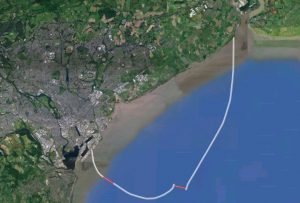 Its expected characteristics are as follows: