*Observatory of the energies of the sea

Companies are anchored in an industrial reality

In 2017, 79% of full-time equivalent positions related to marine energy are counted among service providers or suppliers in the value chain. This category of stakeholders also represents the largest share of investments and turnover. Developers / operators of projects related to marine energy are still in the investment phase, which is higher than their turnover, as no farm is still active in France. 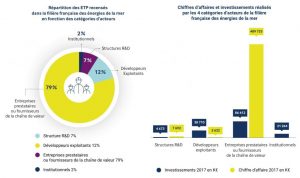 If the SMEs are in majority in number, it is logically the big companies in terms of employment. In the same way, mid-sized companies are structuring the sector, and large companies will see their workforce grown up as part of the commissioning of the first commercial parks.

Companies’ positioning on the value chain

BFOW and FOW concentrates most of the jobs.
The significant weight of offshore wind is explained in particular by the level of maturity of the sector, and by the export, which has an essential dimension today in the turnover. For FOW the calls for projects for the development of pilot farms seem to have been decisive for the companies suppliers or providers of the value chain, in terms of employment. As for other technologies, tidal energy is the third most important: the sector is waiting for the launch of pilot or commercial projects.

Growth in the jobs

Increasing employment in almost all coastal regions, with a still significant growth in the Pays de la Loire concentrating half of the jobs of the sector, but also present on the rest of the national territory.

The dynamism of the Pays de la Loire Region can be explained by: