For the first time, the ocean energy sector has been specifically monitored by the EurObserv’ER barometer and results are published in the “Ocean Energy Barometer 2019”. 243,4 MW capacity of ocean energy is officially registered in the EU at the end of 2018.

Since 1998, the EurObserv’ER barometer measures the progress made by renewable energies in each sector and in each member State of the European Union in an as up-to-date way as possible (with figures less than 12 months old). EurObserv’ER produces a series of figure-backed indicators covering energetic, technological and economic dimensions.

The official estimate of the European Union’s renewable on-grid ocean energy capacity is put at 243.4 MW in 2018 (see table below).

However the official statistics bodies have not monitored the pre-commercial prototypes and demonstrators that were operating in 2018. These prototypes are often tested over relatively short periods (1-2 years) then taken out of service once their test programme is completed.

The EurObserv’ER barometer includes a more comprehensive list based on wave and tidal stream projects and prototypes active in 2018 as reported by Ocean Energy Europe and a couple of other projects and prototypes using tidal range, OTEC and salinity gradient systems. Considering for this larger scope, the capacity of ocean energy projects in service in 2018 reaches 263.4MW.

Although a lower number of demonstration projects are identified in other European countries, the ocean energy supply chain is still very active in Spain, Portugal, Italy, Sweden, Denmark, Belgium, the Netherlands, Ireland and Greece. Technology developers and solutions providers do not hesitate to export their competencies out of their own territorial waters.

At this early development stage, ocean energy costs are very dependent to site, depth, capacity, etc. and vary a lot from project to project. Therefore it is still delicate to come up with current standard tidal stream or wave energy converter reference costs. Although cost figures for pilot projects should be considered carefully, estimations about 340 – 380 €/MWh based on tidal stream pilot projects in 2018 have been made by the European Commission’s Joint Research Center (JRC). An encouraging 40% reduction was observed compared to the 600 €/MWh LCoE estimated in 2015.

A sharp reduction in costs is still needed to bring the technologies to market by 2025 and 2030 as mentioned in the Strategic Energy Technology Plan (SET Plan) published by the European Commission in March 2018. Tidal stream and wave energy converter LCoE targets were quantified and set to reduce to at least 150 €/MWh in 2025 and 100 €/MWh in 2030, as the capacity of the installed projects rises.

Crowdfunding to raise funds and involve the general public

Not only providing another source of income, crowdfunding is also a way to ensure a closer involvement and backing of the general public, ultimately reducing the risks during the project development stage.

The 2020 ocean energy targets defined in 2010 by the National Renewable Energy Action Plans (NREAP) were over optimistic, with more than 2 250MW expected installed capacity compared to the actual ~250MW. Consequently the current adjustment and extrapolation of the ocean energy capacity growth path to 2030 should be done carefully.

The European Commission has published in May 2018 an updated forecast including three worldwide and Europe-wide growth scenarios for ocean energy sector capacities through to 2030.

The European ocean energy capacity targets for the 3 scenarios are: 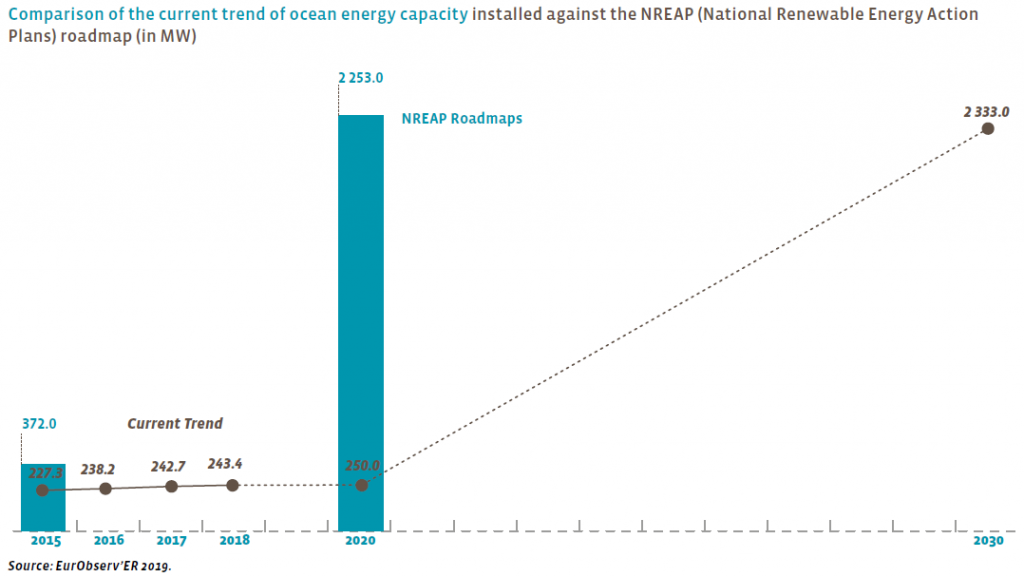