The LIDAR is an innovative measuring device to characterize wind and atmosphere. It will be used for example in marine renewable energy (MRE)

LiDAR (Light Detection And Ranging) is an optical measurement device that characterizes the atmosphere. A LASER emits, at several megahertz, short pulses into the air which are reflected back by aerosols naturally present in the atmosphere (dust, pollution, drops of water etc). The particles returning the light travel at local wind speed, the signal received by the LiDAR is therefore phase-shifted by Doppler effect in proportion to the speed of particles in the LiDAR’s line of sight. This is known as radial velocity measurement.

The time of flight (time between the emission of a laser pulse and the reception of its backscattering by the aerosols) makes it possible to identify the location of the particles in the line of sight and thus to reconstruct the radial velocity profile using preset ranging. In addition, backscattered signal processing is used to determine aerosol concentration in the atmosphere along the line of sight with a range of several kilometres.

The LHEEA’s new scanning LIDAR, the WINDCUBE 100S produced by Leosphere, has a range of 3 km and has an articulated head to control the viewing angle in azimuth (360 °) and in elevation (+/- 110 ° from zenith).

Programming a series of shots at different angles reconstructs the vertical profile of the wind vector with a period of about 3 seconds. Other types of scanning are used to map a vertical slice of atmosphere (fixed azimuth and variable elevation) or a horizontal slice (elevation zero and variable azimuth) and thus to study atmospheric phenomena spatially: atmospheric boundary layer, wind turbine wakes, aerosol dispersion, large scales of turbulence etc. 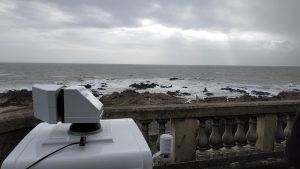 The scanning LiDAR will be used for academic and operational purposes by the DAUC, EMO and SEM-REV research groups in the LHEEA laboratory to respond to societal and environmental issues directly related to energy transition. It will thus be a decisive tool to support the development of offshore wind turbines including: